The Art of Deception: Be a Productive Morning Person 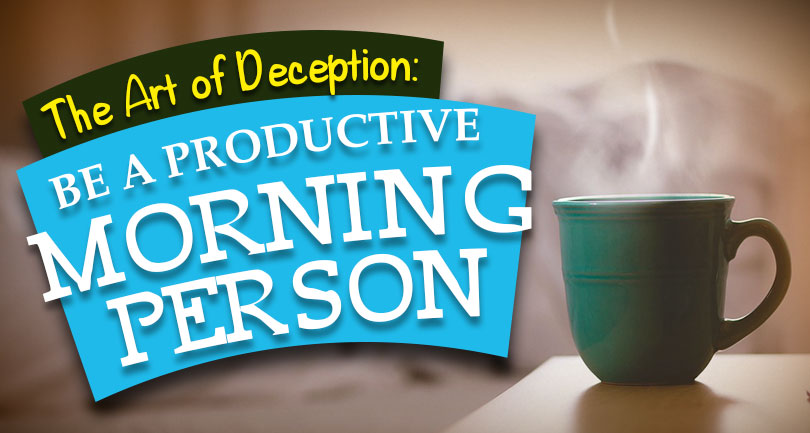 If you’ve ever poured salt into your coffee, slept through four different alarms, or been tempted to wear your pajamas into work as a time-saving measure, you might not be the best at mornings. There’s a special kind of person who can wake up at 6:00am every morning, do yoga, check their emails, and waltz into the office drinking kale juice and actually like the taste.

I cannot make you one of those people.

But I might be able to help you fake it ‘til you make it.

Do as much as possible the night before to make the next morning easy for yourself.

Pretend you’re putting everything together for a drunk person to get out of the house tomorrow morning. Plan what you’re going to wear tomorrow, any medication you need to take, and and pack your bag for work in between the Buzzfeed quizzes that may well be keeping you up until 2:00am.  (Look, they’re definitely reaffirming your entire self-worth because darn straight if you were a Disney princess you’d be Belle.) You’re well-read. You’ve read tons of Buzzfeed quizzes

Starting early means that you’ve got more time to make mistakes. Jimmy from work copied and stapled 500 copies of the wrong mailer? You’ve got time to fix that before anyone notices!

Be realistic about how much time you’ll need to get ready in the morning AND about how early you’ll actually wake up.

Not all alarms are created equal. Some people like to wake up to music that gets gradually louder, meaning they can drift gently into consciousness. While others figure if you’re going to be dragged into wakefulness, that’s already pretty traumatic, so why pretend it isn’t. Wake me up with an explosion if you can.

Only you know what’s right for you: slow-rising smooth jazz or an alarm like an air-raid siren.

That being said, everyone uses their smartphone for, well, everything now, but if you’re a chronic oversleeper, maybe you can use your phone exclusively for Candy Crush and sometimes an alarm clock. Alarm clocks are special clocks that you can set to wake you up (you might not have heard of them.) Consider the Sonic Boom Alarm Clock, which has an alarm louder than a jackhammer, a bunch of flashing lights, and shakes your entire bed. If it doesn’t wake you up, you’ll never have to wake up again, because one of your neighbors will murder you.

If you are worried one of your neighbors wants to murder you, the Lock n’ Load Gun Alarm Clock might be more up your alley/more likely to scare your neighbors. Also for you to consider: an alarm clock that will run away from you. Just like time runs away from you. And control over your future. Where did it go? No one knows. But you can probably track down this alarm clock.

Also, don’t hit snooze. It’s like the shady drug dealers you got warned about in middle school. You hit it once, you’re gonna hit it until your family stages an intervention.

You know how your best friend keeps half-breaking up with her boyfriend and everyone’s just like, listen, we know where this is going, and it’s going to end for real eventually, why do you keep dragging it out? That’s what hitting snooze is like. Sleep is breaking up with you. Just face it.

3. Caffeine is Half the Battle But Really Like Only Half

If you’re going to eat breakfast, there is lots of evidence that eating something protein-rich will keep you going for longer than cereal or waffles.

Eating the right foods can help your mind stay focused throughout the date, thus increasing your productivity and, you know, time. Fuller, healthier meals will save you from having to make a run to the nearest bagel place.

You probably already have a streamlined caffeine delivery system. I won’t try to get between you and your caffeine. I know better.

As a perpetual non-morning person, I’ve learned that waking up early sucks, but it also helps do your job better. Period. You can say “but I’m a person of the night!” And that’s fine, Batman, but that means that you’re most likely going to enjoy your leisure time at night. Instead, wake up early and get your work done so that you have more time to a.) fix mistakes and be productive between 9-5 and b.) enjoy the time when the sun goes down. Who knows, if you perfect the art of morning person deception, you may even start fooling yourself.

So get up. Bump some tunes and go kill it, champ.

Everyone’s morning routine is different. How did you train yourself to become a morning person? Let us know in the comments below! 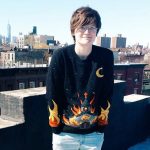 Caroline Schmitt is a stand-up comedian based in Athens, GA. She has years of experience not being a morning person. Oh, and she’s a really good copywriter. You can follow her on Twitter for more musings on life and dogs.