How a Nice Girl Negotiates 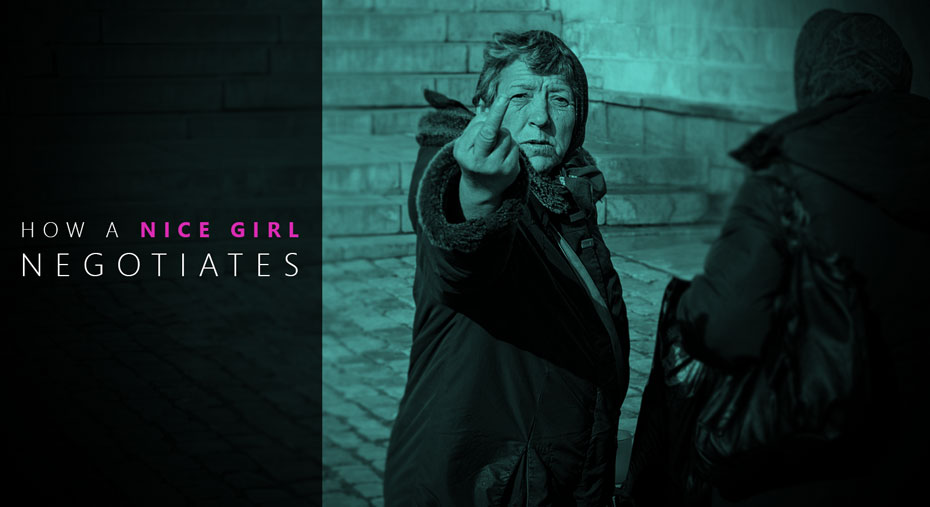 I am a really nice person.

And, although it’s not a preclusion being mean, growing up in the South definitely shaped my niceness persona. My friends and I were raised to be welcoming, friendly, able to converse with anyone in the world. It is practically hardwired in my brain to be helpful, to be kind, to want to be liked.

Being nice is a problem when clients don’t pay

I’m not bragging; I’m actually complaining. Being super nice and overly pleasing is a big problem. Not just for me, but many freelancers in web services. Especially those of us who identify more with the “creative” aspect of the job than the “business” side of things.

So, obviously, when I started asking for advice on how to be a better negotiator, how to get more money for my work, the problem of my niceness kept coming up.

The first time someone showed me Mike Monteiro’s video “Fuck You, Pay Me,” I thought his shock approach was funny, but his aggression felt a little heavy-handed. Most of my clients have been great, and although there were some icky situations, they were cleared up with forthright communication.

But Monteiro is simply illustrating what everyone working on the web eventually faces: clients who don’t pay. He gives a number of scenarios:

All of those situations suck. The key preventive measure is to get your compensation in a written, signed contract. Contracts require negotiation and finesse. This is the moment when the Nice Girl leaves the room.

It’s not that I’m going to be rude when negotiating. It’s just that being too nice can get you in trouble. Here are some classic Nice Girl moments I’ve had:

It’s an old saw already, but I’m going to say it anyway: it’s especially important for women to be fearless when negotiating because on average women are paid less than men, especially in tech. And, for some of us, we also deal with the baggage of being Nice Girls. So the more I can negotiate for a higher rate, the better the salary expectations will be, not just for me, but for my fellow freelancing ladies out there.

Recently, I was preparing for a negotiation, so I re-watched Monteiro’s video. Although I didn’t exactly frame my negotiation in his terms (can’t totally escape the trappings of a Nice Girl, you know), I did have clear messages I wanted to get across:

In other words, it is with the most refined manner and sweetest demeanor that I say, “fuck you, pay me.”